Just How Powerful Is The Nintendo Wii U?

A quick update of what we know so far about what is powering Nintendo’s newest console.

Up till now, the gaming public at large has only been given vague statements like “significantly more powerful than a PlayStation 3 or Xbox 360” and the “it’s 1080p resolution” like when it comes to the true power of the Nintendo Wii U – but what does that actually mean when you get to the bare bones of it.

Without knowing much about its computer-chip innards, it’s a question that just can’t be scratched yet – until now – uhh well, sort of. Recently a bunch of Internet sleuthing has been done to find out just what kind of chip-set the Wii U has inside, the first of which being its central processor.

Clues from computer manufacturer IBM have teased that Wii U would be powered by a chip that’s based on the very same tech found in their super-computer Watson. If you’re a Jeopardy nerd like my self (I doubt it,) you might know Watson from his week-long appearance on the national syndicated trivia show where it thoroughly beat the pants off two legendary Jeopardy champions. 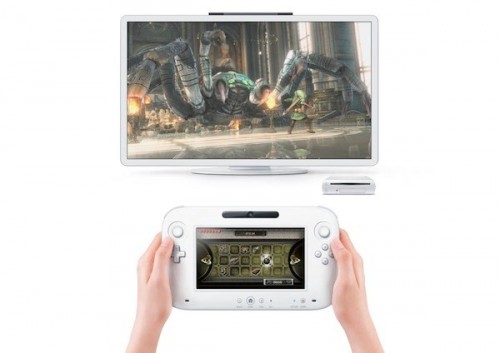 Now we don’t exactly know the clock speed for the exact chip being provided by IBM, and this being Nintendo and their cost conservative ways, don’t expect a speedy processor that will blow away the competition. It’s probably not happening.

On the graphics front, a good deal of information has been gathered by industry insiders about it’s already identified Radeon GPU, which is reportedly not so on the leading edge. The Radeon graphic card presumably being used in the Nintendo Wii U is from the current generation of Radeon cards still out on the market, particularly the R770 kind.

Honestly, when the talk of computer techno-babble gobbly-gook comes up – I space-out faster than “Spaceballs One” hitting “ludicrous speed.” Yet from what I can gather is while this graphic chip won’t be earth-shattering, it will still be competitively stronger than the typical GPUs that are used in the 360 and PS3.

Piecing the puzzle together with these latest bits of info, it’s a safe bet to say that the Wii U will produce games that will probably look pretty good, and probably look even better when compared to rivals. Again, I say probably because we have yet to really see any real gameplay footage, beyond that strange bird flight demo reel (shown above.)

So really, when it comes to finding out just how power the Wii U is, we’re back to the same clueless situation as before. Of course, graphics and processing power are only one part of a console’s success – and what is more important is that not only should games on the Wii U look reasonably attractive but are fun to play too. Hey, that’s just reasonable little old me though.

tags: Wii U, Wii U Controller, Wii U news, Wii U review