If you are familiar with Japanese culture, you would know that it is riddled with thousands of traditions, folk tales, epics and superstitious beliefs. All these amalgamation of thoughts and beliefs have led to the creation of cool video games. 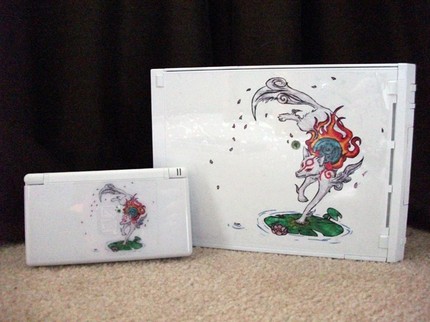 Okami is one such video game which is set in the classical period of Japanese history and tells the story of how land was saved by darkness by the Sun Goddess Amaterasu.

Amaterasu takes the form of a wolf in order to save the world and the scene has been recreated in this beautiful decal which can be stuck to your DS/DSi and the Wii. The scene in the decal was hand drawn by the artist and inked and painted using watercolors. It was later printed on an inkjet printer.

You could go ahead and buy the decals for $9 from PlushWithAttitude at Etsy. This beautiful decal is enough to create an interest in Japanese art and mythology which is truly awe-inspiring. If Japanese culture seems too heavy for you, you could take a look at the Super Mario Wall Graphics Decals which are not too bad either.