Mark the date, save up the pennies, and dig up the sleeping bags to wait in line at your local electronics retailer, because Nintendo’s next portable has a date and price for North America. Nintendo’s little New York City shindig with the media to announce when their revolutionary glasses-free 3D device would become available for North American audiences has come and gone – with yes – an official answer to that much highly sought after question.

In front of large group of industry watchers and journalists, Nintendo of America President Reggie “The Power” Fils-Aiie announced that the Nintendo 3DS will be available for sale in North America on March 27, 2011, in either Aqua Blue or Cosmo Black, for a price tag of – drum roll please… $249.99.

Great Gunpei Yokoi’s ghost! A bit of a hefty price for a Nintendo handheld – in fact by far the priciest of Nintendo handhelds to date. Whether a reasonable price or totally out their minds, Nintendo is confident that the wonders of 3D, a souped-up system in terms of processing power and screen resolution, plus a hungry base of loyal consumers (i.e. Nintendo fanboys) will be enough to line up the pre-orders and day one sales.

Me thinks, they be on to something… What was also learned from the New York media event, besides how many awkward pictures of Reggie Fils-Aiie can be taken, was also two very key items – one being a previously unknown feature, the Activity Log, which tracks and graphs not only your game play hours, but also the amount of steps you take through a built-in pedometer.

By doing a vast amount of both activities, you’ll soon be awarded with hard-earned Game Coins, indicated by a tiny red coin on the 3D’s operating system, that interestingly enough can be spent in games, possibly a new hat for Solid Snake.

The other thing to note, and importantly the one that is sure to be a welcomed relief for a lot of gamers, is the news over Friend Codes. The dreaded unmanageable list of digits used for multiplayer is still around – but wait, hear me out before you blow a nerd-gasket… it’s been revamped with a one Friend Code per Nintendo 3DS system across-all-games strategy, making it easier to keep track of friends and play multiplayer games with them.

So what about them launch day games? Well Nintendo will be getting back to us on that at a later date. For now they’ve given us 30 plus titles, 1st and 3rd party, purchasable during the Nintendo 3DS’s launch window, a 10 week period after March 27, debuting the likes of Pilotwings Resort, Nintendogs +cats, Madden NFL Football, Super Street Fighter IV 3D Edition, Ridge Racer 3D, and much more. 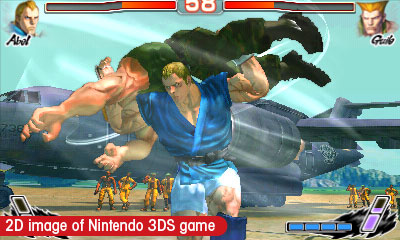 Right now pre-orders are being taken for the Nintendo 3DS ($249.99) in blue or black, through Amazon — meanwhile check out this Sonic the Hedgehog Wii Remote charger or these adorable Nintendo pins.

One thought on “Nintendo 3DS Preview Event NYC: 3D Without the Glasses”