This Cuddly Donkey Kong Plush Is Just So Awesome

Sometimes it feels as if Nintendo loves to play favorites with different regions. I mean, look what happens whenever a new console is announced, specifically the launch of the Nintendo DS. Japan got a vastly superior choice of colors, while other regions (North America) got black, a dull white, or even worse, that awful burgundy color for that DSi XL.

Even when it comes to preorder bonuses, other places get cheated out like the idiot at a Las Vegas blackjack table.

Just take a look above at what our neighbors from the Land Down Under are getting just for preordering Donkey Kong Country Returns at Gametraders (think of them as the Aussie video game dealer equivalent of GameStop.) A cute, huggable Donkey Kong plush that we’ll probably never see Stateside.

I is sad panda (or in this case sad monkey).

Although, to be fair, you don’t really need much incentive to pick up Donkey Kong Country Returns when it hits shelves come this November. The 2.5D platform game is a retro throwback to the Rare-developed Donkey Kong Country games that were released for the Super Nintendo back in mid-90s.

Retro Studios, who you might remember for Samus’s first-person shooter outings in the Metroid Prime trilogy, is taking a crack at bringing back swinging from vines, collecting bananas, shooting out of barrels, and mine cart-riding side-scrolling game play, all neatly presented in some nice looking computer graphics. The studio from Austin, Texas is also adding local multiplayer to Donkey Kong Country Returns, as Donkey Kong’s partner in crime Diddy Kong, joins in on the monkey business. And by monkey business, I mean wearing a rocket pack (because there’s always one of those lying around a jungle) and shooting enemies with a peanut gun.

So then, you’ve got to ask yourself. Are you bad enough dude to mess with this monkey and his peanut gun? Huh? Well, are you? 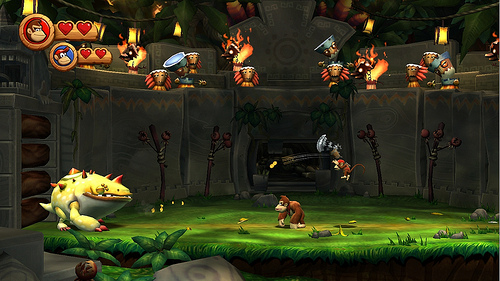 Donkey Kong Country Returns is shaping up to be a pretty sweet gaming experience that I can’t wait to try out this November 21st — super cute Donkey Kong plush preorder bonus or not. (Sigh)

If you enjoy awesome items that you’re probably not getting, then daydream over this 25th Super Mario Anniversary DSi, or Nintendo Wii.