Mario pops onto his newest platform in Super Mario 3D for the Nintendo 3DS. 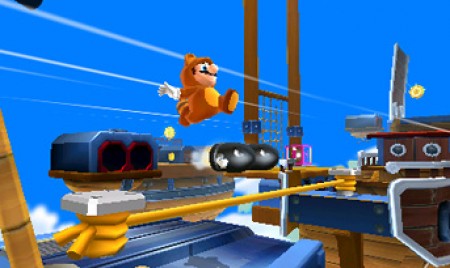 You knew sooner or later that our favorite red-hatted plumber would make an appearance at the Electronic Entertainment Expo, and he did so for the Nintendo 3DS. Indeed — Mario will make his first leap into 3D with the release of the tentatively titled Super Mario 3D, coming much later this 2011.

Mario fans and owners of shiny new Nintendo 3DSs (with pretty much nothing to play) have waited with great anticipation for this title, ever since it was announced shortly at the Game Developers Conference back in March. Nintendo even teased the masses by drawing on a little raccoon tail at the end of the Super Mario logo — which I’m happier than a puppy seeing it’s master return to report has deep significance with this game. That’s because the famous flight power-up of Super Mario Bros. 3, the Raccoon Suit along with your classic Mario standbys, are making their return in a brand new 3DS title that in a sense tries to incredibly merge the best of both Mario’s well-known gameplay styles.

Basically certain levels in Super Mario 3D will change between the birds-eyed view of the Galaxy series, with the flat perspective of Mario games like New Super Mario Bros. Wii. Although neither play style will be individualized to specific sections and will rather blend together into one perfectly sweet concoction.

So for example — one level’s camera can be angled at a sort of two-dimensional plane, yet have 3D depth allowing the player to run to grab mushrooms, jump across platforms, and attack enemies in any space they so choose. I’ll admit it’s a concept that’s better explain in motion rather than my poor powers of description. Good thing I’ve so happen to include the E3 trailer below of Super Mario 3D with some glorious video of the game in action.

Nintendo is planning on releasing Super Mario 3D (possibly not a final title by the way) sometime before the end of the year, most likely around Holiday time. In the meantime, enjoy that footage and then read up on Nintendo newest console revealed at E3, the Nintendo Wii U.