Learn about Kid Icarus: Uprising’s online multiplayer and AR card battles, which were just announced at this year’s E3. Coming this Holiday Season to the Nintendo 3DS is Kid Icarus: Uprising, the long awaited return of angelic hero Pit and a series that wasn’t really good to begin with honestly (what?! I’m just saying!) But that’s neither here or there, because this 3DS game isn’t anything like the 8-bit original you might remember — it’s totally different and totally awesome.

Directed by Masahiro Sakurai, the same creative mind that gave us Kirby & the Super Smash Bros. series, Uprising recently received some well deserved attention at Nintendo’s E3 keynote. There up on the giant widescreen, a good sampling of the game’s thrilling mix of air and ground combat was displayed, as well as a surprised showing of it’s multiplayer.

3-on-3 online multiplayer to be specific — which, basically takes Uprisings’ ground-based gameplay and divides it into a competitive team-based battle using weapons with their own special abilities and shortcomings. In order to win a match, teams must lower their opponent’s shared health-bar and when a “Pit icon” appears over one individual’s head, the team that takes out that player is declared the proud victor.

One peculiar thing I should point out at the end of that E3 trailer for Uprising, was a brief look at an interesting feature using augmented reality cards — the very same ones used for the 3DS (oh look a t-shirt.) The AR cards had different characters from Uprising, like Pit and Medusa, that when placed side-by-side, came to life and would actually start fighting each other. How cool! 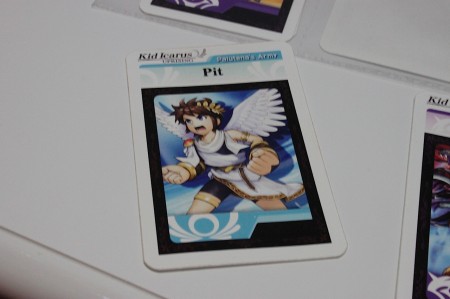 Nintendo didn’t say exactly how these AR cards would make their way into Kid Icarus: Uprising — although maybe they plan on packing one random Uprising character card with each game and have fans try to find other fans with different cards, social interaction with other people — you know — that kind of thing.