The final game in the bit-blocky chiptune-blasting action series from Gaijin Games is coming to WiiWare at the end of February for North America. There are some truly great games out there that can manage to bring together music, style, and addicting game play successfully. One of those said games is the fantastic 8-bit light-show that is the Bit. Trip series, from developer Gaijin Games, which pulls its blocky visuals from the retro age of Atari 2600s and ColecoVisions.

One interesting tidbit about the Bit. Trip series is its originality. If you’ve ever picked up and played one Bit. Trip game and then try the next, you’ll soon find that no one title shares the same base game play as the one before it. Now strangely, but with good purpose, that’s about to change with the next and final Bit. Trip game – Bit. Trip Flux. 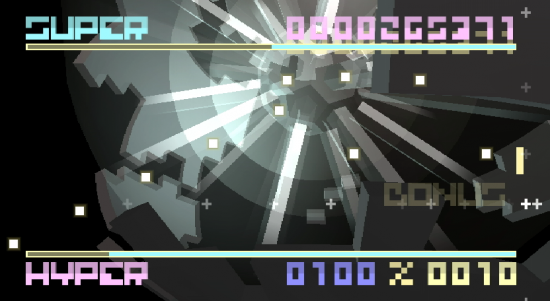 In Bit. Trip Flux, the core game play returns to its roots, back to that of the original Bit. Trip Beat, where players take control of a paddle and try to hit waves of oncoming blocks. Picture the iconic Pong game, but with graphics that use every conceivable color in the rainbow and a challenge that’s more bullet hell shooter than simple tennis game.

Although you won’t need to worry about difficultly or the thought of throwing a fastball with your Nintendo Wii Remote in frustration, Bit. Trip Flux is designed as a funky disco-ball journey of CommanderVideo (the hero of the Bit. Trip series) to his home world, and because of that there are no “game over” screens.

“Lunacy?!” I hear you say? Well think not of it, because Gaijin Game’s Alex Neuse gives good reasoning for such a design choice: “To help tell the story of CommanderVideo’s transition back to The Source, we wanted to convey the point that it is an unstoppable pull which draws him home. For this reason, there is no Game Over.” 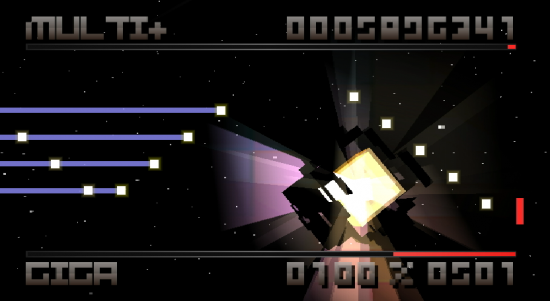 Bit. Trip Flux fluctuates onto the Nintendo WiiWare store this February 28 with a price that is yet to be determined, but my crystal ball is sure that it will come around the same price as the other Bit. Trip games – 800 “Reggies” or Nintendo Points. If you like some other awesome things to spend your hard earned dollars, how about Capcom’s Ghost Trick: Phantom Detective or Nintendo’s Mario Sports Mix.

One thought on “Bit. Trip Flux Makes Final Voyage to WiiWare on February 28”