Club Nintendo members can soon get their chance to par take in the Super Mario Bros. 25th anniversary festivities, with a fantastic selection of commemorative Mario pins. This is particularly evident when it comes to their beloved series – The Legend of Zelda to Donkey Kong – and even their past hardware – Nintendo Entertainment System to Game Boy.

From special limited edition consoles (see 25th Anniversary Super Mario Bros. Wii and DSi) to collectable trinkets big and small, Nintendo doesn’t pass up a chance to give their fans a chance to grab a piece of memorable nostalgia.

Up for grabs this time is collection of Mario pins that scream sheer awesome. The four copper pins were made to celebrate the 25th anniversary of Mario’s first adventure through the Mushroom Kingdom to save Princess Toadstool from that lizard-breath baddie King Koopa.

They all feature that famous red cap wearing plumber, but each one differs in design and cameos from other noticeable Nintendo co-stars (Princess Toadstool, Toad, and Yoshi) of the iconic platform series. 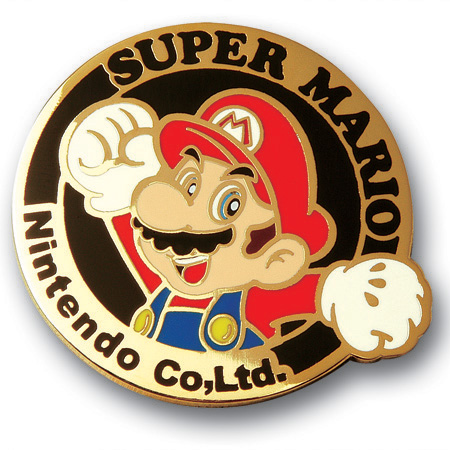 Sounds really great, right? Well, get ready for your excitement to shrink down just like after touching a poison mushroom from Super Mario Bros. The Lost Levels (a.k.a. that original super hard version of Super Mario Bros. 2 that never came to North America.)

The catch is that the Mario pins are an exclusive item to only members of Club Nintendo – an easy hurdle to jump over for sure, seeing as joining Club Nintendo is free, but the second one will probably stop you dead in your tracks.

The Mario pins are 450 Club Nintendo coins each (yeah, they don’t come as a set.) In total they cost 1800 gold coins to collect all four.

Which means you probably won’t be able to collect them all unless you’ve got a lot cash to buy a lot of Nintendo branded products. (If you do though, can I borrow some money? I’ve got some school loans to pay off!)

The Mario pins will be available in early November, so maybe you can get one Mario pin and form a sharing club with a couple of your friends. (Hey, it’s an idea at least.)